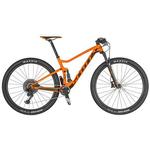 Armed To Demolish The Trail, The Scott Scale 710 has a Geometry totally inspired by racing at the highest level! The Scale Hardtail 710 Mountain Bike has been redesigned and exquisitely modified by Scott for 2017. Co-developed with Olympic Champion, 5x World Champion and 5x World Cup Champion Nino Schurter, the 2017 Scott Scale 710 has been completely overhauled for the ultimate in hardtail performance. With trickle down tech from the outrageously light RC model, the Scale 710 saves weight over the previous model and gets an all-new geometry with longer top tubes, taller bottom bracket height, steeper seat angle and shorter chain stays. The new frame design is designed to offer improved comfort both standing and seated, without sacrificing stiffness. Add in Boost thru axles, new to the 2017 Scale, for added stiffness and handling performance and you get a hardtail with impeccable handling. A rapid Shimano XT 22 speed drivetrain, Shimano XT Disc brakes and Syncros components thgroughought combine to give you a hard tail that is just itching to finish first. With a Scale 3 Carbon frame you get a super lightweight, stiff bike with spec tough enough to take whatever you throw at it. Key Features Scale 3 Carbon Frame HMF Shimano XT 2x11 Drive Train FOX 32 SC Float Performance 100mm Shimano XT Disc Brakes Boost Front and Rear Syncros Carbon Components

Show all categories in Sports and outdoor