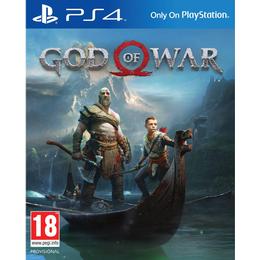 Rank 17 in the PlayStation 4 Games category

I loved the earlier god of war games but over time they became a bit stale (especially the psp titles). However God of War on the PS4 was refreshing while keeping to the feel and style of the game. It is an evolution and a very good one at that, genuinely one if the best PS4 games I have ever played

Has played most of the previous God of War games, grown tired of the story and game mechanics. Actually had low expectations for this one. God of War is, according to me, one of the best titles this year. New Fresh Story! It is no longer solely about Kratos. With him on his journey, he has the son Atreus. The harsh reality between father and son, the memory of the past. Glances from Norse mythology. It all blends together and emerges in a lovely tale. More tactical fighting, makes every fight fun and it flows on well. One can immerse himself in tactical combo, or run simple attacks throughout the game (hit, roll away, hit). The open world is fun to explore. The surface is limited though, so you never feel like you're drowning in extra missions. The game lasts around 15 hours, then it has been found and done most of it.

The new God Of War is really the best game I've ever played. The story is truly catchy, its characters are lively and full-bodied and one is entertained throughout. Everyone who loves a good story and fun content-like gameplay will also love this game!

Lowest price for God of War is £11. This is currently the cheapest offer among 17 retailers.