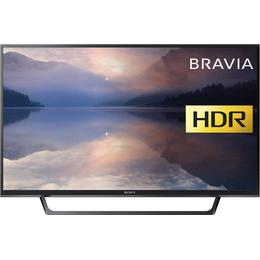 This LED TV from Sony comes, among other things, with a 1366x768 resolution. Enjoy amazing contrast and vibrant colours thanks to the support for HDR.Read more

Lowest price for Sony Bravia KDL-32RE403 is £239. This is currently the cheapest offer among 6 stores.

From Sony comes this well-built LED TV with a size of 32 inches and a 1366x768 resolution. Supports High Dynamic Range which gives light and colours a fabulous depth.

Even if the movie you're watching doesn't have a 1366x768 resolution, it will still look great thanks to the clever image enhancement technology from Sony.

This TV has an LED display, which is the most common and proven technology. Some of the advantages of LED displays is its ability to achieve great brightness and also very natural colours. They are also very energy efficient, which means you are doing something for both the environment and your wallet.

As you can see, Bravia KDL-32RE403 is a TV with many handy features. The price for this model is below average for the category, which makes it a good purchase. As far as TVs go, this is one of the most most popular TVs on PriceRunner at the moment and the current lowest price is £239.00.