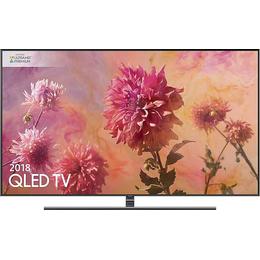 Rank 363 in the TVs category

+ Good Image + Good Sound + Good Sharpness + Ambient Mode - No ATMOS support - Yet no HDR10+ material available. Picture: Brutally good picture! 4K UHD from TV's Netflix, Youtube or Amazon Prime delivers incredibly crisp image. Q9FN is even incredibly bright! No problem see on TV in the middle of the day, Sound: Amazing sound out of this thin TV! Here you can do without extra Soundbar or home theater Other: Steamlink, streaming games from PC to TV and an Ambient mode that acts as a screensaver that measures ambient light and makes the TV almost invisible to the wall. Remote: The TV manages to handle all external devices with a remote control (Xbox, Apple TV and a legacy Com Home HUMAX box). This is done via ARC, one of the TV box's HDMI connectors. * ang. ARC look further down. The negative: For this price, all the standards should be in place, but one can't with the TV's apps get HDR10+ (right now?) and ATMOS for example. There is a standard called HDR (HDR10) and cards give HDR a little better “Umphf” in colors and blacken to movies. However, there are different standards. HDR10, HDR10+ and Dolby Vision. The latter two are the newest and provide the best picture. But Q9FN has “only” HDR10 and “HDR10+”. The problem is just that HDR10+ can't be seen anywhere. Amazon Prime should have it reportedly, but I have it but movie information shows only HDR support. Absolutely nothing wrong with the picture, but you don't know if it could have been even better. Most 4K UHD Blu-ray players have Dolby Vision, but the TV will not be able to utilize (but HDR10+ “is in the works”). This means that if you want optimal image via Win10, game console or Blu-ray, you need to wait and see if your devices receive HDR10+ support. Another thing applies to ATMOS sound. There is no problem if one has external player with ATMOS support attached to an amplifier. But it doesn't go stream TV's Netflix app and get the ATMOS audio out via HDMI ARC. NETFLIX also does not list the Samsung TV as Dolby ATMOS compatible. *ARC — Even if the TV had supported ATMOS, it requires a standard called EarC to output the audio to external devices. However, the TV has several features included in the new EARC standard, but unclear if it will get all. Summary: Image and audio are top of the line 2018, but if you want EARC, ATMOS support on onboard apps or want to see materials with HDR10+, consider waiting for purchases for 2019 Line Up

This TV is of course the flagship on the market right now. The panel is shabby good. However, with all automatic fixes it took some settings to get the perfect picture. But once there, it is unbeatable. This is the perfect place for all the devices, the TV controls everything yourself, satellite dish, home cinema etc. a single cable to the TV and you get to plug everything in a separate box so you don't have to all the cables up after the wall to the tv. something on it.

Lowest price for Samsung QE65Q9FN is £1,050. This is currently the cheapest offer among 2 retailers.