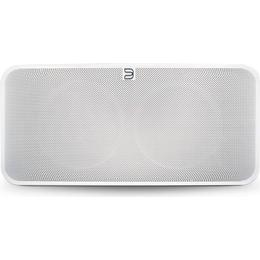 Rank 1586 in the Speakers category

Miles behind the competition and not catching up

Bluesound just started marketing themselves as The original in high res multi room streaming. Its no coincidence. Sonos has hinted its moving into high res music with its new technical and software plattform S2. Being the original is soon the only selling point Bluesound will have left. It is an accomplished speaker, no doubt, but the competition (read Sonos) does everything better. Living with Bluesound is a constant struggle with networking issues and a underdeveloped app to match. Plug and play? Forget it, its plug and spend hours and hours reinstalling, tweaking router settings, cursing and sending emails to a stressed out support. Once in a while a firmware update fixes some issues but hands you new ones. Its like watching someone drown very slowly. Quite the sad display. Bluesound just can't keep up. As for the end user the problems makes the simple task of playing music a chore not a joy. It is very clear Bluesound underestimated streaming and networking. A good speaker just isn't enough. This is a software game and they are miles behind. For Bluesound to stay in the market they will need to innovate massively but with their history its hard to see that coming. A reasonable guess is that Bluesound in this form will be sold or cease to exist within the next couple of years. Think long and hard before you consider Bluesound, chances are The original will also become The forsaken and forgotten.

Lowest price for Bluesound Pulse 2i is £699. This is currently the cheapest offer among 4 stores.

Exciting, entertaining and smart - read about popular products and trends, get Black Friday tips and be notified about new exclusive offers and promotions every week.