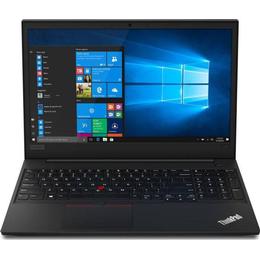 A portable computer with an AMD Ryzen 5 processor with plenty of processing power. The SSD drive works faster than an HDD and you get 8 GB of RAM.

Lowest price for Lenovo ThinkPad E595 20NF0006UK is £665. This is currently the cheapest offer from 1 retailer.

The market for laptops is wide and there are computers in every price range. The internal storage on this computer is a 256 GB SSD drive. The graphics card included with this computer i an a Radeon RX Vega 8. It is an integrated one, which means that the graphics card is mounted on the motherboard, which often brings with it lower performance.

The computer from Lenovo comes with the operative system Windows. It has an 8 GB RAM. More RAM allows your computer to run more applicantions at the same time.

The CPU, a quad-core AMD Ryzen 5, has a 2.1 GHz clock speed. Thanks to the multi-core processor you can run several applications at the same time without them interfering with each other. To perform all the operations you ask for, the computer uses the CPU. A more powerful CPU makes the computer faster.

This is a top-ranked computer as far as popularity goes on PriceRunner right now and the current lowest price on ThinkPad E595 20NF0006UK is £664.80. It has a great average review of 4.62 out of 5 and its components make it a great purchase.