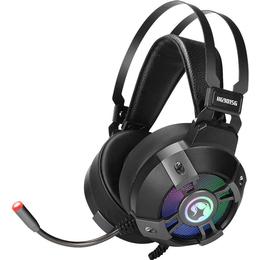 This gaming headset from Marvo is of the over-ear configuration. This model includes built-in controls that lets you adjust the volume.Read more

Lowest price for Marvo HG9015G is £18. This is currently the cheapest offer among 13 stores.

A gaming headset by Marvo that is well suited for any game imagineable. It is easily connected with a cord for highest possible sound quality and has a built-in microphone so that you can voice chat with your teammates. Put on this headset and plunge into a world of dragons, aliens and heroes!

Over-ear headsets are often larger than other types but have more hardware and often better sound quality. A built-in microphone makes this model very practical, since it can be used for voice chats, for example.

It weighs 599 grams, so it's not the lightest headset on the market, but you can also take that as it being robust and solid. With a really long 2.2 metre cord, it's so much easier to plug it into your computer or phone. None of the limitations that a short cord brings with it.

This is a product with a current lowest price of £18.46. It has multiple built-in features, which makes it a very useful model. With a good headset, your gaming nights is a whole new experience.