Cope with the summer heat with a fan in your home. A cheap way to cool off when it’s just too hot. In our test, the Xiaomi Smartmi Fan 2S was the best choice among floor fans for its many functions relative to its price. 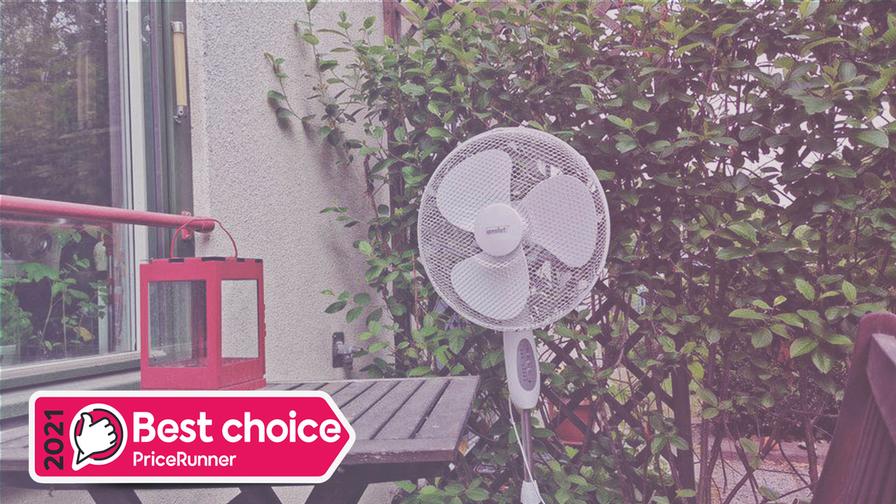 During the hottest period of the year, staying cool tops everyone’s wishlist, especially at night when the heat can make it difficult to sleep. While it’s possible to invest in different types of air conditioning systems, the simplest way to stay cool is to buy a fan. Whether you choose a table fan, a floor fan (in practice, a table fan on a stand) or a tower fan doesn’t matter very much, as they all do the same thing. Typically, they simply shovel around air your home in more or less the same way as the wind does outdoors. They don’t actually cool anything, but as long as they blow on you, you feel like it’s cooler in the room, and in many cases, that's all you need.

We tested floor fans in a home environment on sunny and warm days and can definitely say that not all fans are created equal. Our fans were placed in an environment that lacked cooling air conditioning and were used by family members of all ages. During the test period, we took into account the following aspects.

Shorter fan with lots of functions and power 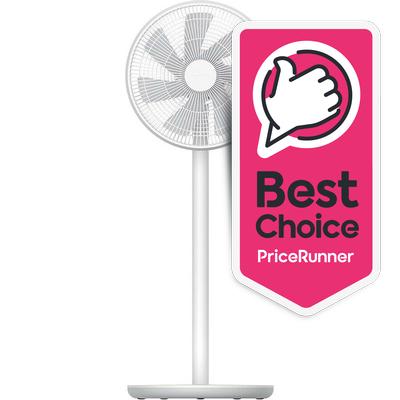 The Xiaomi Smartmi Fan 2S feels a bit like an experiment in how much you can squeeze into a fan. It can be powered by mains power or battery (if you can do without that bit, the Smartmi Fan 2 is the same fan, but without a battery). It’s controlled and can be automated via an app. It also simulates a natural wind breeze if that’s what you want. At the same time, it has some problems.

The whole construction is well built and the material is primarily aluminium. The rather sturdy weight of 3.6 kilos is mostly at the bottom, which makes it really stable.

Sadly, the height isn’t adjustable, which means this is a relatively short floor fan. However, there is some height adjustment of the fan head itself, and this works nicely and smoothly without any of the traditional "plastic clicks" that cheaper fans have (it would have been lovely to be able to adjust it via the app, but no...)

The fan has two buttons and a series of LEDs for manual control. They aren't very logically marked so it takes a while before you really figure them out.

As a normal fan, however, it works very well. Despite its size, it shovels a lot of air around and, at lower speeds, it’s also much quieter than budget fans. The noise level even at the higher speeds is of the more pleasant kind.

One special feature of the Smartmi Fan 2S is the setting for simulated wind. This basically means that the fan adjusts the speed to make it feel more like a natural breeze instead of constant blowing. That might sound a bit weird, but it actually works well and really is rather pleasant.

The fan also comes with built-in Wi-Fi (only 2.4 GHz) and connection to Xiaomi's smart home app so you can control the fan with your phone. This provides increased functionality because you get a full 100 steps in the app compared to only four on the fan itself, and you can also set timers and other automations and voice control, for example, via Google Assistant. Maybe none of that is essential, but it’s handy to have and much easier to control than via the buttons on the fan.

Having a built-in battery is also a nice addition. This significantly increases mobility without you having to fiddle around with an extension cord. Battery life is up to 20 hours, though that does depend on the speed. In our tests, it worked for a full evening on the balcony without any problems.

The Xiaomi Smartmi Fan 2S promises a lot and delivers well on the most important things. It’s well built and functional, but above all very quiet and efficient.

Simple and cheap tower fan with a nice design The Tristar VE-5985 is a really cheap tower fan that has a fairly pleasant sound profile and provides a decent air flow. It’s very easy to use and although it may sound a bit loud, the noise is at a low enough frequency that it’s not too disturbing.

The fan itself is almost 80 centimetres high, but unlike many other tower fans, the fan grille itself is only about half of that height, which feels a bit stingy. It also means that you sometimes have to set up the fan on a stool or something to get the draught at the right height. 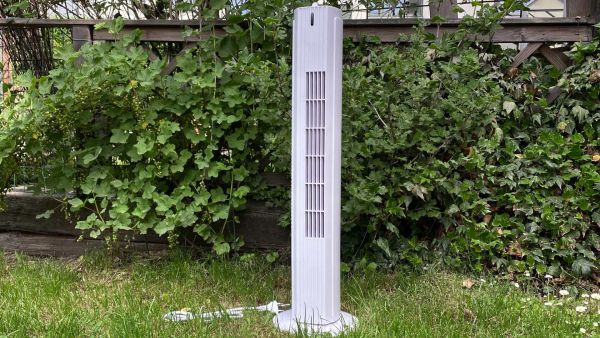 Assembly consists of fixing three screws and then you’re done. Despite this, the result is a nice stable fan. One good detail is that there’s a built-in handle so you can easily move the fan around.

On the front there’s what looks a bit like the receiver part of a remote control. But no remote is included, so we think Tristar must also offer a slightly more expensive model where that function is available. 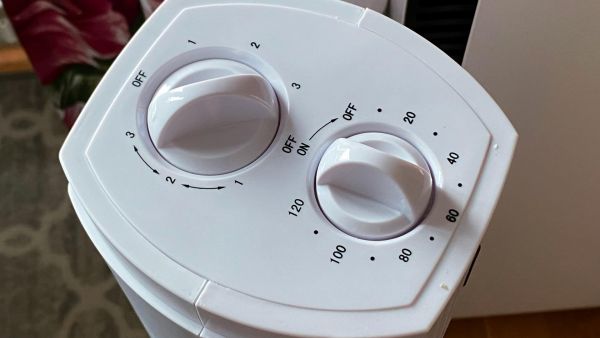 You control the fan using two knobs on the top. One knob for speed (in three steps) and speed plus oscillation (also in three steps), while the other knob is the timer (20-120 minutes). It’s all pretty simple and easy to understand. 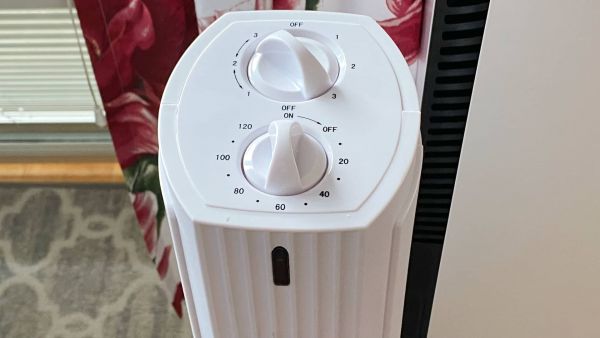 The Tristar VE-5985 is a cheap tower fan, but it does its job much better than some we’ve tested that cost twice as much. The sound profile is quite high, but not really disturbing, and the fan is both easy to maintain and easy to use. 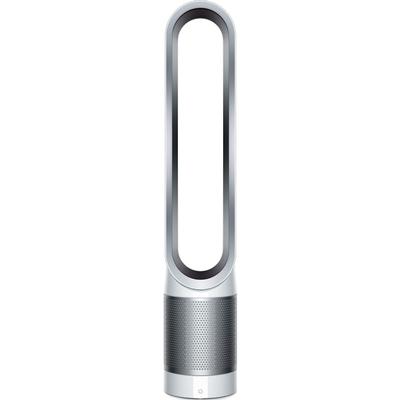 The Dyson Pure Cool isn’t a tower fan you’ll want to buy right off the bat. Partly because of the pricetag, partly because it actually does a mediocre job of cooling. However, it does an excellent job when it comes to air purification, but we’ll start off by taking a look at the fan design.

There are two negative things about the Dyson Pure Cool. First of all, it’s very plasticky. While a bladeless fan has a rather unique design and looks good in photos or at a distance, the Pure Cool gives a really plastic impression when you get up close to it. Even the filter grille at the bottom of the unit is only metal-coloured plastic, which reinforces this impression.

Once it’s up and running, however, you can’t hear any plastic creaks or the like of the sort you hear on cheaply built fans.

The remote control is unfortunately even worse and looks like it came with a budget fan.

In terms of functions and air purification, on the other hand, it’s a very good product. After one season of use, we can confirm that it’s really good at removing pollen indoors. On the fan display, you also get a graph showing how much airborne debris it has removed. 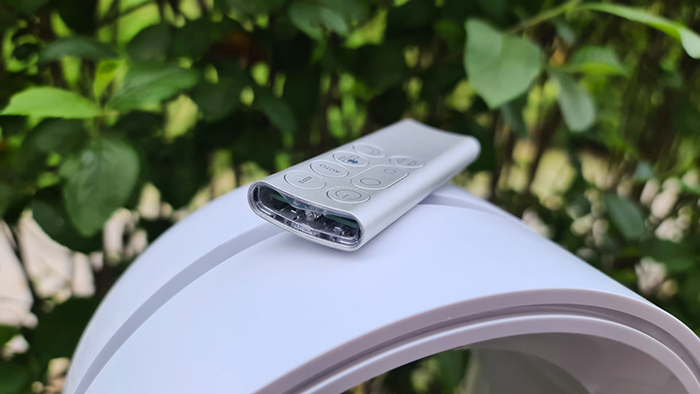 Things get even more detailed when you connect Dyson's app. You can see detailed graphs of several different types of air particles that have been captured. Of course, the app also works as a remote control for all the fan's functions. It has 300 degree adjustable oscillation and also the possibility to reorient the direction in which the fan is blowing.

The Dyson Pure Cool is an air purifier with limited fan capability. As an air purifier it’s fine, but as a fan it’s not much good and certainly not capable of shoving the air around on long hot summer days. The Honeywell QuietSet HYF290E4 has a slightly higher pricetag than many other tower fans on the market. So, do you get more fan for that extra money? In terms of design, we’d say yes, but otherwise... not really.

There’s nothing particularly wrong with the design of the fan, at least not in terms of sheer appearance. The tower itself is really quite attractive. The upper part, which houses all the controls, is a bit 1990s futuristic in style.

While the controls are clear in the sense that you can see what they are for, the buttons could be a lot less plasticky.

Creaky plastic is the theme throughout the entire construction. The fan mounting, which is also adjustable – a really good feature – consists of two parts that click together. It takes a couple of tries to do that however, because the plastic hooks just don’t want to match up. Once installed, however, the fan is surprisingly steady on its tall base.

Once you then turn on the fan, there are lots of plastic sounds. These come in the form of a constant cracking plastic sound. It’s a bit like the sound of drizzle on a plastic roof, and it happens all the time the fan is running. In addition, it’s hardly a smooth sweeping movement, as the QuietSet HYF290E4 tends to jerk as it moves.

And this is before we’ve even noticed the remote control. There's a useful bracket for this on the back, which is pretty much its only positive feature. Batteries for it aren't included, which is really poor. In terms of design, it resembles a lumpy, square block that, even with the batteries in, still feels hollow. Strangely, there are fewer buttons here than on the main fan itself, being only three in number. These are also of a really poor quality, hard to press and creak when you press them.

Lots of settings for the fan

If you overlook the plasticky creaking as it oscillates however, the remaining functionality of the Honeywell QuietSet HYF290E4 is OK. The fan can be set to eight different speeds, including a quieter night mode.

At the lowest normal speed, it’s really quiet and quite pleasant. Top speeds make more noise, of course, but these produce a surprisingly deep hum that really isn’t irritating. In addition, at those speeds, the fan is pretty powerful.

So the function and controls of the fan are essentially fine. Sadly, the Honeywell QuietSet HYF290E4 is just too plasticky in terms of design, has a dismal remote control, and an exorbitant price in terms of what’s on offer.

When it’s hot, the question most of us ask is usually which fans are in stock and whether they come with express delivery. If you plan ahead, or find a store with a large stock, there are a few other things that may be worth thinking about.

At the same time, it may be worth listening to the fan in the store. A good quality motor makes less noise and that contributes greatly to a lower perceived sound level. Sometimes an oscillating motion can scrape or creak and create an annoying sound. It’s important that the fan grille is stable, preferably in metal, and thin. This should reduce any whistling sounds when the air passes through.

Exclusive offers and campaigns every week! Read more about product news and stay up to date on everything you need to know for Singles' Day and Black Friday. You can also find trends, guides and product tests that will help you get the best deals.