New Xiaomi 11T and other products!

Xiaomi revealed a new line up of products at their most recent event, including their new flagship phones Xiaomi 11T and Xiaomi 11T Pro. Missed the event? Then take a look at this 11 minute event summary video to see all the exciting upgrades!

On the 15th of September tech giant Xiaomi unveiled a range of new products at their product event. And although we got an interesting line up of products and services including the Xiaomi Pad 5, smartband and mesh wifi. The star of the show was undoubtedly the new line up of the Xiaomi T11 phones including the standard and the Pro version which both have seen major upgrades when compared to their predecessors, they're already being dubbed as market leading within premium phones thanks to their impressive specs.

The Xiaomi T11 Pro is currently available at an early bird price until the 24th of September costing £549 versus the original £599. The Xiaomi T11 is available for £549. The release date for the phone has yet to be annouced. 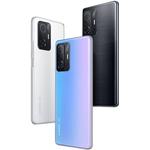 Exclusive offers and campaigns every week! Read more about product news and stay up to date on everything you need to know for Singles' Day and Black Friday. You can also find trends, guides and product tests that will help you get the best deals.