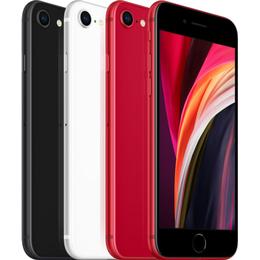 Want a cheaper phone that isn't completely lacking in performance? This is it! Great camera, a 64 GB storage and a lower price compared to other iPhone models makes it an appealingShow more

Good at the price

Good phone for the price

incredibly fast at its price. could have had a better camera but otherwise there is nothing to complain about

Good phone, but gets a little slow with tiedn

Nice phone but slow with the time. Good design and easy to use

Lowest price for Apple iPhone SE 64GB (2nd Generation) is £354. This is currently the cheapest offer among 34 stores.

Apple iPhone SE may be small on the outside, but it's big on the inside, with a performance that very nearly matches the iPhone 12. With an impressive 12-megapixel camera you can take some great pictures. Unlock the phone or make safe payments with Touch ID right on the home button. This model simply doesn't compromise on performance to lower the price.

Take pictures with the impressive 12-megapixel iSight camera, or shoot videos in 2,160p (4K) resolution at 240 fps. Store your images and videos on iCloud to access them anywhere, all while saving storage space on your phone.

The phone is built from aluminium and glass, and has a 4.7-inch Retina HD screen. The screen is smaller than on certain competing models, but is surely enough for most people. Naturally, there is support for such services as Apple Pay and AirPlay.

iPhone SE suits those of you who want a smaller phone, but without compromising on performance. With the same A13 chip as the iPhone 11, you can be sure that is can handle whatever you throw at it. The 1 960 mAh battery will last you all day without having to be charged.

Today the lowest price on iPhone SE 64GB (2nd Generation) is 354.00. For that price you get a smartphone with a screen from one of the major brands. A phone which also has an eight-core processor and 64 GB internal storage. This model is one of the most popular phones right now and has a review average of 4.51 out of 5.