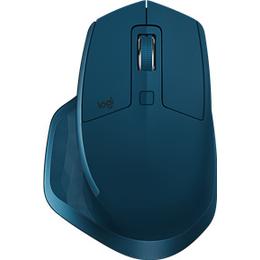 Delicious mouse but unreliable over Bluetooth

Good, heavy (taste and please) mouse with a lot of features. I was a little skeptical about button layout, but it has proven to be well thought out and intuitive, being especially fond of the automatic gear for the scroll wheel, as well as the mouse's relatively wide range of customization. The bluetooth abilities are nothing to brag about though, it bounces on and off several times a minute for me and is really completely useless. Having greasy around with drivers and other solutions unsuccessfully, and don't have problems with other Bluetooth devices (Headset, phone and Xbox controller), they work fine in practically all of our 130m2 apartment while MX Master 2s bouncing on and off even at ½ metres distance. It should be said that the mouse works perfectly when using Logitech's supplied Unifying Receiver, it just doesn't help that much when one of the selling points is the mouse's ability to work with multiple computers at the simple push of a button, but only one Receiver follows along. So, yeah, if the mouse is going to be used with one PC and a (very small) dongle isn't a problem, then it's a nice mouse, otherwise not.

Martinzgren
Level 5·Updated a year ago

I can recommend the computer mouse for the following: Good battery life, battery indicator, three channels to be able to switch between different devices and ergonomic design.

Really nice work mouse. The ability to release the scroll wheel is wonderful to scroll long and much into something. The side scroll wheel is also very appreciated when sitting in Excel or Photoshop. The blue tooth coupling has worked flawlessly and the multi-unit support is good smooth when switching jobs and private laptop. Used for a year and not encountered any quality problem yet.

Lowest price for Logitech MX Master 2S is £48. This is currently the cheapest offer among 33 stores.