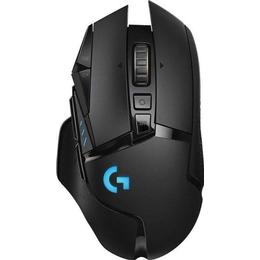 Update 2021-04-28: The right mouse button is now faulty, about 14 mdr after purchase. I probably should have believed the bad reviews of Logitech's new switches... Originally reviewed 2020-04-01: I've switched from the old G502 Proteus Spectrum (and had a G502 Proteus Core before that), and had well read other reviews complaining that the new switches Logitech uses are of worse quality than in the past. They now seem fine to me (in the first week at least:)), albeit they give a slightly different click sound/feel. It's now more taste and pleasure than that they feel decidedly inferior. The problems others describe are accidental double-clicks/failing drag, which I haven't experienced myself yet. The scroll wheel, on the other hand, is just of poorer quality than on the older editions. It gives an irregular metallic clique when scroller, but not all the time. And a rustle if you move the mouse quickly from side to side. Specifically the scroll clickery is super distracting, and not something that plagued my two previous G502 mice. (And no, I know well difference between regular scroll and freewheel scroll... it's with the elm “notch” scroll that in addition to the deep “thunk” sound when it goes notches there is also a metallic “ping” sometime in a while) Otherwise, it's as expected - good, even a bit lighter than my old G502. Nice battery-time, good precision, etc. The bad/clicking scroll-reel is enough, however, that I'm seriously considering returning the mouse.

The best mouse I've had!

Quite clearly the best mouse I've used throughout my many years of gaming. Been through Deathadder and other popular muse, but this one is simply perfect. Had the previous version that wasn't lightspeed, and it really as fine and without any problems. Only reason I bought the new one was because the old one had a support for the thumb I didn't care wildly much about.

Lowest price for Logitech G502 Lightspeed is £70. This is currently the cheapest offer among 24 stores.