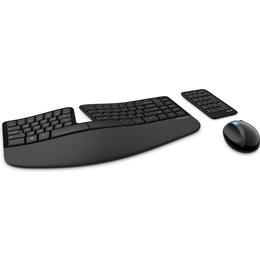 Rank 81 in the Keyboards category

Dukelukeem
Level 8·a year ago

Drive at work and the two-piece keyboard is a delight to type on when you get used to. The minimalist design and curves look really classy on the desktop. However, no fan of the mouse so it is not used. If a private person could buy only the keyboard at a sensible price then the rating would be higher. It softens the material on which one rests the wrists has begun to bubble and become uneven after a year. It dragging down on the look.

This set has done wonders for my shoulders and wrists. I didn't think it would make that much difference but thought it was worth testing then I was often stiff and sore in the wrists and shoulders. Having switched to this set, it's much better. It takes a bit of time to get used to keys and set but it also forces one to hold correct finger set which is fine. That numpad is separate is amazing. Moving your arm between keyboard and mouse is much shorter distance and your arm can have a more natural angle when using the mouse. It's actually very strange that other ergonomic keyboards have built-in numpads. Some negative things I'm bothering on is that it's not mac-customized at all. It works to mac but the special keys don't work and one has to remap cmd to the right place. Also, despite months of use, I have not learned that the insert/page up keys sit so close to enter and arrow keys. You almost always access the wrong keys when you're going to navigate with the arrow keys or click enter. And there isn't exactly any way to feel a difference between those keys.

Lowest price for Microsoft Sculpt Ergonomic Desktop (Nordic) is £52. This is currently the cheapest offer among 7 stores.