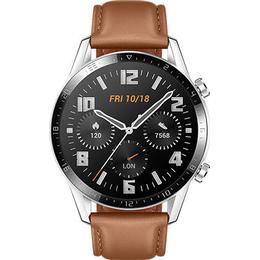 You can receive calls or reply to messages on the go with this smart watch. It has a built-in GPS, so you can see the distance of your bike ride. It weighs 41 g.

I have that watch myself and I think it's best smart watch I've had.

Now that I'm writing this judgement I've had the watch for exactly a week's time and feel like I got the hang of enough of the features to tell you about my experiences. To get the negative over with first, there's really just one thing that I miss on the watch is being able to respond directly to the screen at, for example, a whatsapp message. I went from a Samsung Active that becomes a bit what I'll compare against. On Active, you can do it despite a smaller screen. It's a feature that today I lack on GT 2. Beyond that, there's nothing that I miss on Active that I don't have on GT 2. GT 2 Flaunts (in addition to basically the same functionality on sports functions) with speakers, larger and better looking screen, extremely much better looking watch overall (looks like an actual watch, ability to take calls in the clock (it can't be Active when it doesn't have speakers), always on display for an extended “real watch look” and then I haven't even mentioned the battery life which is one without the “key features” of this product. I have now had it on my arm for a week's time and played well with it at the beginning to just let it sit on my arm if I wasn't going to check the watch, check the message, etc., the usual thing. I have at the time of writing 52% left of the battery. 52%!!! How they succeed in this yes have no idea and 2 weeks will absolutely not be a problem to achieve. To put it in perspective against Active I had to put it on charge after at my best 1½ day. Granted, Active loads fast, but I personally don't want to keep on and take it off and charge every so often. Huawei's GT 2 does everything that I want (in an extremely stylish and luxurious packaging) disallow you to respond in text form to messages. But I knew that before I bought the watch and thus can't blame the watch for it then I could have chosen another watch if I absolutely needed it. Hence full pot and can highly recommend this one.

Mind-sick watch for the price that does not disappoint battery live the time head Synce fine with my phone and I'm nothing but satisfied. Super neat on one's arm and is not solved.

Lowest price for Huawei Watch GT 2 46mm Classic Edition is £119. This is currently the cheapest offer among 9 stores.