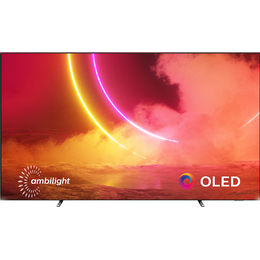 From Philips we get 65OLED805, a 65-inch OLED TV with a 3840x2160 (4K Ultra HD) resolution. Enjoy your favourite apps such as Amazon Prime, Netflix, YouTube and Spotify right on yoRead more

Lowest price for Philips 65OLED805 is £1,798. This is currently the cheapest offer among 8 stores.

For those of you who want the very best, 65OLED805 from Philips is the way to go. The crisp 4K resolution looks really great. Thanks to this model's image enhancement technology, even older movies will look sharp. Light and colours get a seldom seen depth thanks to the support for HDR.

With the operating system Android TV, you get so many options that you might as well cancel your cable service. There is a built-in Chromecast, which means you can show images, play music or stream your favourite TV shows from services such as HBO and Netflix from your phone. Android TV also supports Google Assistant, which lets you control the TV with Google Nest devices. So when you can't be bothered to reach for the remote, just yell "Google, gurn down the volume" or "Google, show me an unboxing of Philips 65OLED805".

As you can see, 65OLED805 is a TV with many handy features. This model has a good average rating of 5.00 out of 5 and all its features make it a premium product. It is one of the most highest ranked TVs in terms of popularity on PriceRunner right now and currently has a lowest price of £1797.99.