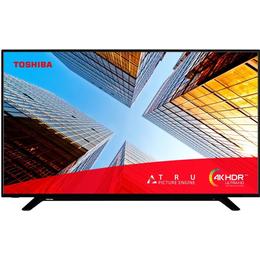 43UL2063 from Toshiba is a 43-inch LED TV with a 3840x2160 (4K Ultra HD) resolution. Enjoy amazing contrast and vibrant colours thanks to the support for High Dynamic Range.Show more

Take your television viewing to a whole new level with 43UL2063 from Toshiba. It gives you a crisp 4K resolution. This is a great TV for a great variety of viewing needs, whether you're a sports fan or a movie buff. Three USB ports for those who want playback from external hard drives.

Even if the movie you're watching doesn't have a 3840x2160 (4K Ultra HD) resolution, it will still look great thanks to the clever image enhancement technology from Toshiba.

Aforementioned features are just some of the advantages to 43UL2063. As far as TVs go, this is one of the most most popular models on PriceRunner right now and the current lowest price is £239.99. This model has a price below average for TVs. If it also has the features you want, this might be a good purchase for you.