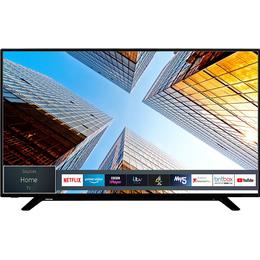 55UL2063 from Toshiba is a 55-inch LED TV with a 3840x2160 (4K Ultra HD) resolution. Get a richer TV experience thanks to HDR, which brings great contrast and vibrant colours.Read more

Lowest price for Toshiba 55UL2063 is £320. This is currently the cheapest offer among 9 stores.

A 55-inch LED TV from Toshiba with a 3840x2160 (4K Ultra HD) resolution. 55UL2063 has an optical out, so you can connect an optical cable to your home theatre system to get multi-channel sound. Three USB ports for those who want playback from external hard drives.

This TV has an LED display, which is the most common and proven technology. Some of the advantages of LED displays is its ability to achieve great brightness and also very natural colours. They are also very energy efficient, which means you are doing something for both the environment and your wallet.

Aforementioned features are just some of the advantages to 55UL2063. If you compare prices on 55UL2063 on PriceRunner, you will see that the current lowest price is £319.99. It is also one of the most highest ranked TVs in terms of popularity. This model has a high average rating of 4.91 out of 5 and all its features make it a good purchase.