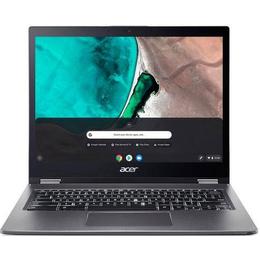 This portable computer has a high-performance 1.6 GHz Intel Core i5 processor. The fast hard drive is of the SSD type and 8 GB of RAM is fully adequate.

Before you start looking at different laptops you should think about what it will be used for. This laptop has an integrated graphics card, an UHD Graphics 620. This means that the graphics card is built-in with the motherboard, which often means lower performance. The processor is a quad-core Intel Core i5 which clocks in at 1.6 GHz.

This Acer laptop has the latest screen technology in the form of a touch screen. The RAM of this particular model weighs in at 8 GB. More RAM allows your computer to handle its tasks faster.

This model's screen measures 13.5 inches. This laptop has an UHD Graphics 620 graphics card. It's integrated, which means that the graphics card is built-in on the motherboard. The internal hard drive is a 128 GB SSD drive.

The processor, a quad-core Intel Core i5, has a 1.6 GHz clock speed. To elevate the performance the processor has multiple cores, which makes running multiple applications smooth. The processor is one of the most important parts of your computer, if you want a fast computer you need a powerful CPU.

This is one of the most popular computers on PriceRunner at the moment and the current lowest price on Chromebook Spin 13 CP713-1W (NX.EFJEK.003) is £699.99. It has a high average review of 4.38 out of 5 and its components make it a great purchase.