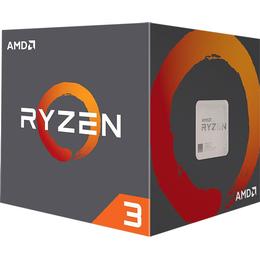 Rank 25 in the AMD category

A nice little processor that I was so lucky and buy on offer for about 360 kr. Yes, it's an older CPU, now-about-days, as the Ryzen 5000 series has come out when I write this review. It's a 4 cores, 4 threads CPU, which is unlocked, which is to say it can be overclocked if you have a motherboard that supports this. Performance-wise, it is often compared to i5-2400, but it is closer to i5-7400 (which costs double it). It's without a built-in graphics card, so it's necessary to procure one like that. Even without overclocking, this CPU chugs off without a hitch to Casual Gaming. Combined with RX590, then I play Far Cry 5 on Full HD and ultra insets with 70+ frames per second. I bought it when I got my RX590 and was sitting on an Athlon 200ge and was afraid the Athlon would be restricting the graphics card too much. I have been and am - still - happy about it. Only now in late 2020, with Cyberpunk 2077, is it starting to show its age. But it's not impossible to play with it. If you find it on offer for about 350-400 kr, then it's already worth it for a budget machine. TL:DR Solid, cheap CPU that will cover 90% of all gaming needs. Perfect for home/media PC.