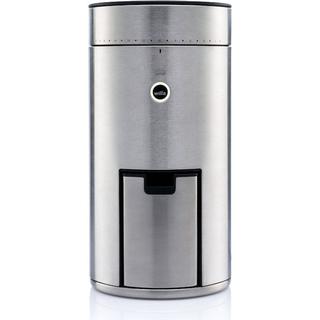 Rank 94 in the Electric Grinders category

Been running with this coffee grinder for a few months and feel like I'm venturing on a judgement now. This is a really good grinder for those who brew coffee. Smooth handling and built for those of us weighing up the coffee every time it should be brewed, ie no big bean container taking space. A very positive surprise was the wave in the cap. Not that I missed that it was there but the wave is surprisingly good. It weighs down to 0.1 grams and is highly responsive. No problem with lag and like that when you put your Chemex on it and weigh the water while you're pouring. Clear numbers and it doesn't turn itself off too quickly either. What about the mill? I grind coffee into brew, mainly using Chemex and brew funnel from Kalita but also to Moccamaster, Cleaver Drip and Swiss Gold 1 cup filters. The mill performs well, comparatively little “dust” or what to call coffee that becomes far too fine and thus over-extracted. Significantly better for brew 'n my old Anfim Best (which, however, was bought to even act espresso mill. The noise level is acceptable but add on the wave/cover when you grind - it does a lot for the sound. Anything negative? I would have wished that the finest grinding rate was considerably coarser and that the 41 steps present were spread from coarse fringe rust to a little finer than needed in brewing other than espresso. I move between about 25 and 39 on the scale of grinding degrees.

Lowest price for Wilfa WSFB-100S is £279. This is currently the cheapest offer from 1 retailer.