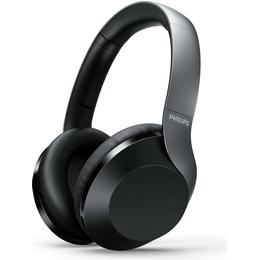 These over-ear headphones form Philips will give you a good sound experience. The wireless range is 10 metres.

sandramoshage
Level 1·a year ago

Nice design and sits well on the head. Whether I would recommend them depends on what they will be used for. The sound is good, and I have not experienced better noise reduction in any other headsets. However, the operation is not very user-friendly and I'm going to use tap/slide functions on the side of the ear accidentally. The phone function is also not the best, since the receiver has difficulty hearing what one says. That said, it's a great headset for the price, where you get more value for money than at JBL.

KasperKet
Level 4·a year ago

In collaboration with Buzzador, I have tested these headphones for a month. I am very pleasantly surprised by the noise cancelling function, which closes out a large part of the surrounding sounds. There are many smart features via buttons and touch on the right earphone. It's smart and works well. The sound is really good and clear. They have a nice and stylish design to avoid walking around looking like something from the future. The fit is great, and the ears are not squeezed in any way, as they are large enough to accommodate the ears under the headphones themselves. However, I have experienced a few weaknesses in these headphones: they are very large and bulge a lot into the sides. It's a matter of taste, and maybe it's my head that's small, but when you wear them, they feel big. The switch to turn on/off, play/pause and switch track works without problems, but it feels quite plastic-like and of low quality. Touch functions also work fine, but it's a pity that there is not some kind of lock function. It helps me to touch the right earphone countless times, and noise cancelling (AMC) is turned off, as a voice tells. After that, you have to touch again to turn ambient sound on to be able to touch again to turn AMC back on. An annoying and slow detour. In addition, ambient sound seems like a completely unnecessary function, as the music becomes so low that for me it has worked better to touch once, so AMC is turned off and subsequently pause the music. I also experience some delay via Bluetooth when, for example, I watch a video on my phone. The sound is so to speak out of sync with the image. Too bad. I experience this as a much smaller problem with my AirPods. Fortunately, a cable is followed by the way that solves the problem. The adapter for aircraft is also a great addition! Battery life is great and they are fast to charge. Though not to have to worry about whether there is power or whether they will soon be running out. It's never been a problem. I think the headphones are on the more expensive end. If the price was justified, I miss features such as locking the touch, automatic pause when the headphones are removed, turning off the ambient sound function, switching only between AMC on/off and bass settings, which are not the most insistent.

Sveske31
Level 2·a year ago

Good for the price

I think they're definitely worth the money. The sound is good and mega plus with noise cancelling. However, I think they are a little too big in the fit. They sit perfectly on my girlfriend, but to me as a woman there they had to be a little less - and unfortunately you can not adjust it.

Lowest price for Philips TAPH805 is £75. This is currently the cheapest offer among 17 stores.

These headphones from Philips lets you consume both music and podcasts for hours on end. They connect cord-free via Bluetooth and with active noise cancelling you get some peace and quiet in the busy office landscape.

This model has a great battery life of 30 hours, so you won't have to charge it all too often. Over-ear headphones are not as compact as other types but have more hardware and often better sound quality.

These headphones have a closed acoustic seal, which isolates you from your surroundings and produces no sound leakage. Perfect if you want to enjoy your music in peace. With some really good headphones, workouts becomes a lot more fun.

This is a popular product with a current lowest price of £74.95. It has a high average grade of 4.33 out 5, which combined with its features makes it a good purchase. Get a whole new sound experience with these awesome headphones from Philips.