PriceRunner takes care of your data 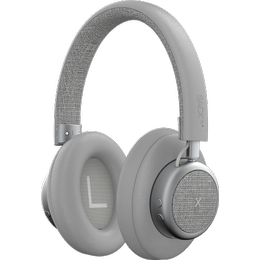 These headphones from SACKit has an over-ear configuration. They are equipped with noise cancelling technology that shuts out all the noise.

Nice outside - rotten inside!

“Bad sound kills good music”. You can usefully replace “Bad sound” with “Touchit” and then you hit 100% spot. But to start with something positive, I'd like to commend both build quality and operation. The earphones feel delicious and sturdy, actually closest to premium, with a nice design. The buttons sit intuitively, and are easy to operate and find while wearing the “steaks”. Connection to mobile, laptop and like. works easily and impeccably, and the connection reaches fine when walking around the home listening to music, or talking on the phone. But from here it goes downhill! Frankly, it seems like more gunpowder has been spent on looks and “feel”, than on the sound experience itself. In any case, you get badly disappointed when the music begins. The soundscape is narrow and uninspiring. There are no profits to track in the devices, to say the least, and it all seems a bit “pinched.” Lower mids are greatly over-represented, which stands in intersecting contrast to the hugely absent and dull hi-end. And best as you think it can not get much worse, then the ANC (Active Noise Cancellation) function is activated, after which it can. About this feature, Sackit writes on their website: "Create the moment when you give you 100% to the music and do not get disturbed by all the things that are going on around you.” Personally, I find it hard to disappear into the music when it sounds like an angry cat is creezing me into the face. 'Cause that's what it sounds like! The ANC function introduce highly audible noise in the form of a high-frequency and constant susen (hiss). So while the function removes (one part) noise from the outside, it adds a lot of noise from the inside. This is not surprising in itself - because it is really quite normal - it probably closer to the degree that surprises. It's really loud.. But the worst is that the frequency picture changes MARKANT by activation of the ANC - and not for the better. Now the middle tone sticks off, and it sounds like you've taken a cardboard box over your head. Why, I have no idea, but something ugly, frequency-wise happens, especially around 470hz (is my guess + -) where it sounds like a boost is happening. Thus, the final glow is off, in what should have been a party fireworks display of a listening experience. I can't recommend the headset - not for music in any case. If you like talking on the phone while walking around in a cheese bell, then this might be something for you. For everything else, you need to stay away.

Lowest price for SACKit TOUCHit Over-Ear is £95. This is currently the cheapest offer among 3 stores.

SACKit TOUCHit Over-Ear are a perfect choice if you love to listen to music. They connect cord-free via Bluetooth and have active noise cancelling for a complete musical experience.

An integrated microphone makes this model very practical, since it can be used for phone calls, for example. To connect with a 3.5 mm connector is quick and easy, you just connect them to your device. The wired connection also gives you very good sound quality.

The wireless range is 10 metres, which means you can step away from your phone or computer and still stay connected. Integrated buttons for the volume lets you lower or raise the volume with the push of a button, instead of having to take out your phone.

This is a product with a current lowest price of £95.00. It has several built-in features, which makes it a very useful model. Get a whole new sound experience with these awesome headphones from SACKit.