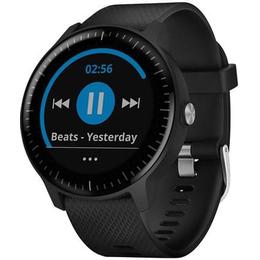 Rank 25 in the Sport Watches category

Does not live up to expectations

Experiencing that the clock has not been able to synchronize to phone (iPhone X). Known problem. Rebooting both clock and phone solved the problem, but it's annoying to have to do sometimes. The sound stutters when running clockwise on the left wrist (which most people have). This is because the Bluetooth antenna in the clock does not have good enough range to communicate with headphones where the bluetooth antenna is in the right earphone (e.g. BeoPlay). So every time the arm swings behind the body, the music goes in the headphones, as the body is in the way of the signal. Apparently, this is a well-known problem. It can be remedied by setting the clock on your right wrist when you're out running. It's problematic if you're won to wear a watch on your left wrist. In relation to the running function itself, I felt that the “Tempo” function was rather imprecise. Also experienced that the “autopause” function sometimes took a long time to start again after it had paused. There is no “audio cues” function on Garmin Vivoactive 3 Music despite the fact that it can play music and that the function is available on other Garmin models. You only get info per kilometre on the watch screen, which is brought to your attention by vibration. There is also no “Compete against yourself” function, or “race at a specific speed” function, which is found in eg. Endomondo, and also available via the “Virtual Partner” software in Garmin's more run-oriented and more expensive watches. I feel that is a big shortcoming in terms of motivation. In Garmin Connect you can add connections from Facebook, but I haven't been able to do that yet as I get error notification in both the app and on the website In relation to GarminPay, it only works if you have an account at Nordea or Jyske Bank. Problems accessing the GarminPay menu in the app require restarting the app. Good things include that it was easy to get music on the phone via Spotify. The interface of the watch can be customized very much to meet your personal needs, and there are plenty of good interfaces/watch dials through the Garmin Connect IQ app. There's a good heart rate sensor in the watch. Garmin Connect works well with Endomondo and Strava, as soon as my watch was in the reach of my phone, my activity was uploaded to both Endomondo and Strava immediately. All in all, I do not feel that the clock has all the functions you might want, so you can leave the phone at home on the run. And there are still a number of minor shortcomings here and there, which unfortunately leaves you frustrated.

Lowest price for Garmin Vivoactive 3 Music is £229. This is currently the cheapest offer among 7 retailers.