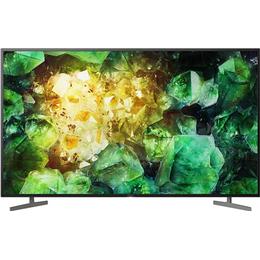 Here you get a nice 55-inch TV from Sony with an eye-catching LED display. Supports High Dynamic Range which gives light and colours an amazing depth. Android TV brings full-fledged support for Google Assistant and connection to your smart home. There's a built-in Chromecast and you can find hundreds of apps, apart from favourites such as Netflix and Spotify.

With this TV, Sony has used image enhancement technology to use the TV's potential to the fullest. Even older movies and media which doesn't have a 3840x2160 (4K Ultra HD) resolution will get a facelift and look better than ever.

KD-55XH8196 comes with pre-installed Android TV. This means that you get access to a variety of apps and features from Google Play Store, such as VLC, Netflix and Spotify, to name a few. The perhaps most handy feature with Android TV is that you can stream video or music from our phone without the use of external devices such as a Chromecast or Apple TV.

As you can tell, there are many good things to say about KD-55XH8196. This model has a high average rating of 4.40 out of 5 and all its features make it a good purchase. As far as TVs go, this is one of the most highest ranked TVs in terms of popularity on PriceRunner at the moment and the current lowest price is £599.00.