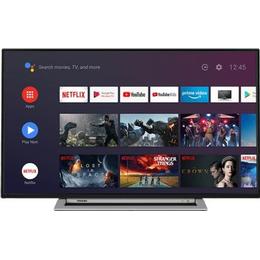 From Toshiba we get 55UA3A63DG, a 55-inch LED TV with a 3840x2160 (4K Ultra HD) resolution. Built-in Chromecast makes streaming and sharing content from your phone super easy.

Lowest price for Toshiba 55UA3A63DG is £468. This is currently the cheapest offer among 3 stores.

For those of you who want the very best, 55UA3A63DG from Toshiba is the way to go. The crisp 4K resolution looks really great. Android TV brings full-fledged support for Google Assistant and connection to your smart home. There's a built-in Chromecast and you can find hundreds of apps, apart from favourites such as Netflix and Spotify. Even old classics which haven't been remastered in HD will look better on this TV thanks to image enhancement.

For the most frequently used devices you have four HDMI ports for your gaming consoles, Apple TV or other media players and cable receivers. If you want to display movies or images from external hard drives, you have two USB ports for that.

55UA3A63DG has an LED display, which is still the most proven and most popular technology on the market. Having a TV with an LED display has many advantages. Since this technology is so well-grounded in the TV industry, it's always a safe purchase. LED displays can also achieve amazing brightness and incredible colours.

With this TV, Toshiba has used image enhancement technology to use the TV's potential to the fullest. Even older movies and media which doesn't have a 3840x2160 (4K Ultra HD) resolution will get a facelift and look better than ever.

As you can tell, there are many good things to say about 55UA3A63DG. This model has a good average rating of 5.00 out of 5 and all its features make it a good purchase. If you compare prices on this TV on PriceRunner, you will see that the current lowest price is £467.79. It is also one of the most highest ranked TVs in terms of popularity.