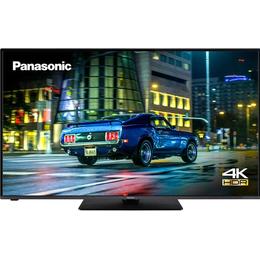 TX-55HX580 from Panasonic is a 55-inch LED TV with a 3840x2160 (4K Ultra HD) resolution. Relive your favourite movies and games with HDR, which brings a whole new level to light anShow more

Lowest price for Panasonic TX-55HX580 is £449. This is currently the cheapest offer among 13 stores.

This model is a 55-inch LED TV made by Panasonic. Four HDMI ports for your consoles and DVD player. You also find two USB ports if you want to connect an external hard drive. This TV has an optical out, so you can connect an optical cable to your home theatre system to get multi-channel sound.

For your gaming console or media players, such as Apple TV or Chromecast, you have four HDMI ports to connect to. If you want to stream pictures, movies or audio from external hard drives, or just charge your phone, you have two USB ports.

In conclusion there are many good features to TX-55HX580. This model has a high average rating of 4.66 out of 5 and all its features make it a good purchase. As far as TVs go, this is one of the most highest ranked models in terms of popularity on PriceRunner right now and the current lowest price is £449.00.