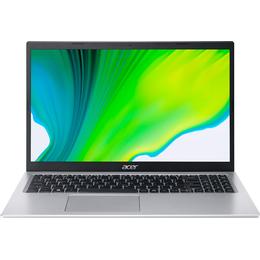 A laptop with a 2.4 GHz Intel Core i5 processor with good performance. The SSD drive works faster than an HDD and there is also 16 GB of RAM, which is more than plenty.Read more

The market for laptops is broad and there are computers in various price ranges. The graphics card in this portable computer is an Iris Xe Graphic. It is integrated and can't handle the same workload as a dedicated card can. The processor is a quad-core Intel Core i5 which clocks in at 2.4 GHz.

Aspire 5 A515-56-511A (NX.A1GEG.001) is a laptop with the Windows operative system. The RAM of this particular model weighs in at 16 GB. If you play a lot of graphics-heavy games, that amount of RAM would surely come in handy.

This model's screen measures 15.6". The computer has an integrated Iris Xe Graphic graphics card. Integrated cards are often slower than dedicated ones since it has no memory of its own. The internal hard drive is a 1 TB SSD drive.

The processor in this is an Intel Core i5. It is a quad-core unit with a clock speed of 2.4GHz. Thanks to the multi-core processor you can smoothly run several applications at the same time. The CPU is one of the most important components of your computer. A more powerful processor makes the computer faster.