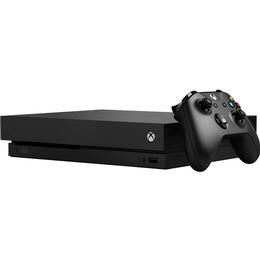 Rank 52 in the Game Consoles category

Xbox One X is the most powerful gaming console. The games float on better, load faster. The console takes up less space! There is only plenty to say about this xbox console. Had received the maximum number of servants if xbox one's hadn't been so good the one with. If you're not hungry for ps4 or already own an xbox one, Xbox one X is a good purchase! If you own an xbox one s, there's not much in favour of an upgrade.

I'm really happy with this smart speaker from Google. It has a good sound and a nice distribution between Bats and treble.

Meldijan97
Level 3·a year ago

There is nothing negative to say about this console, but anyone considering buying a new console shouldn't think much more than to strike! What you can say about the experience is that everything flows on as it should and even better, with cruel graphics and fast downloads. The design is also a big plus as the console doesn't take so much space with the smooth and slim design. Very quiet it is too!

Lowest price for Microsoft Xbox One X 1TB - Black Edition is £450. This is currently the cheapest offer among 2 retailers.