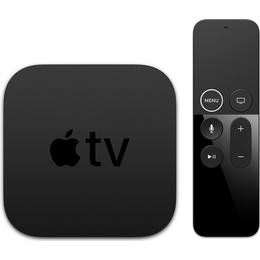 I'm absolutely not an “Apple guy”. Rather on the contrary, I think you get more for money with android, for example. Then I've had both mac and iphone when I draw this conclusion. But Apple TV 4K they have succeeded properly! It's wonderful to have everything in the same place if you like me sit on a (for the moment of purchase) very expensive television, which happened to be the last generation before they became “smart” and could have apps in them. I run: Viaplay, HBO, Netflix, Plex, SF Kids, SVT 1, TV4 Play and have tv app like COM HOME, and it all in a little and relatively smooth box that works well! The graphical interface is neat (as it actually usually is on apple products) and everything is where it should be. The machine itself, I love. To the point that I bought two of them. In a day to day experience, it works great if you just want to flush, or choose between apps or similar, but really don't like to use it when typing text, such as searching on youtube etc. If you ignore that, you cannot get away from the fact that they have actually created a fantastic product that could just as easily cost even more, given the manufacturer and how they normally settle in terms of price.

Just the feature that you have apps directly installed on your device fixes a lot of airplay problems between AppleTV and an IOS device that I've had before. We are now streaming everything here at home and set up Yousee!

Very nice. The only thing I'm bothering a little bit at is the touch on the remote.

Lowest price for Apple TV 4K 32GB is £153. This is currently the cheapest offer among 24 stores.