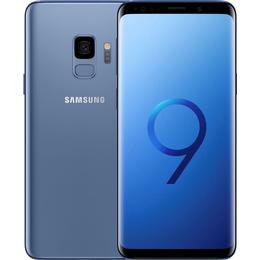 Unless an abundance of internal storage is a priority for you, 64 GB should be enough. A large 6-inch screen makes this phone easy to use and perfect for streaming videos.

Rank 86 in the Mobile Phones category

Compared to the S8, unlocking your phone has become much easier!

Really fast wait, like the iris scan and the very fast fingerprint reader.

Lowest price for Samsung Galaxy S9 64GB is £429. This is currently the cheapest offer among 4 stores.

This is Galaxy S9 64GB from Samsung which was released in 2018 and is equipped with one rear camera (up to 12.0 Mp), one 8 MP front camera and a powerful octa core processor. With a 5.8-inch OLED screen and a water-resistant casing this is a phone that delivers as advertised.

Galaxy S9 64GB has a 6-tums OLED screen with amazing colours and a 1440x2960 resolution. Under the hood, you'll find a Samsung Exynos 9810 chip running at 2,8 GHz. Thanks to this powerful hardware, your apps will run smoothly.

The phone is also shock resistant to handle a knock or two. The front camera lets you use the phone as a mirror and for taking selfies! It also lets you shoot videos at 960 fps with 2160p (4K) resolution. In this day and age, headphone jacks are becoming increasingly rare. But this phone does have one, so just plug in your headphones and listen away.

Today the lowest price on Galaxy S9 64GB is 429.00. For that price you get a new model with a display from one of the major brands. A phone which also has an eight-core processor and 64 GB internal storage. This model is one of the most popular phones right now and has a review average of 4.54 out of 5.