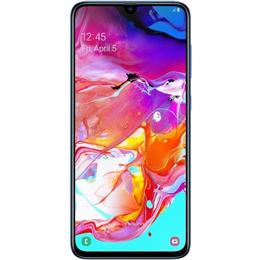 The battery has a large battery of 4500 mAh. An octa core processor makes sure your apps will run without any lag.

I've been using Apple products all my life. When I thought prices exceeded my budget, I chose to “join the dark side”. I just had to get used to the first one, but soon became happy with it. For only the 2,500 kroner you get a phone that can as much as an iPhone and more. That's why I think it's worth a try if you consider changing.

Lowest price for Samsung Galaxy A70 6GB RAM 128GB is £220. This is currently the cheapest offer among 7 stores.

This is Galaxy A70 6GB RAM 128GB from Samsung, which was released in 2019 and is equipped with a powerful octa core processor, one 32 MP front camera and three rear cameras (up to 32.0 Mp). With a 6.7-inch AMOLED display and a 1080x2400 pixel screen resolution this is the phone for those who want something that will work just as well every day.

Galaxy A70 6GB RAM 128GB has a clear touchscreen which makes the phone easy to use. This phone runs on a 2,0 GHz Qualcomm Snapdragon 675 processor. With this hardware, your apps will load at the speed of light.

One neat feature with this model is that it is shock resistant. A massive internal storage of 128 GB is more than plenty for hundreds of apps, documents and more photos than most people will take in a lifetime. If by any chance space on your phone would become sparse, there are always cloud services where you can store your data so save space on the phone. You also get a 3.5 mm headphone jack, so just plug your headphones into the phone without using adapters.

Today the lowest price on Galaxy A70 6GB RAM 128GB is 219.99. For that price you get a new model with a big screen from one of the major brands. A phone which also has an octa core processor and 128 GB internal storage. This phone has a review average of 4.39 out of 5.